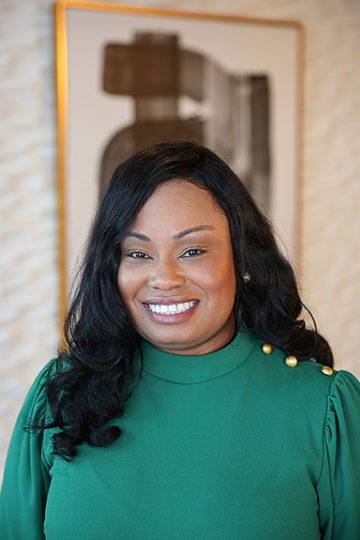 Q: After you completed your education, where did you feel your career path would take you?
RC: I thought I’d follow in my family’s footsteps — of my grandmother, great aunt and aunt — and become a teacher. I had everything planned out – I’d go from teacher to principal and administrator. After I did my student teaching, I found out that my starting salary as a teacher would be less than I was already making in my current role as Regional Trainer at Food Lion.

It’s a tragedy that we don’t pay teachers more. I was concerned I couldn’t survive on that salary.

I have acted as a facilitator at different times throughout my career, so I have used what I learned when I was studying to become a teacher. You have to know how to keep your audience’s attention – whether that audience is made up of first graders or adults in a continuing education class. Neither group has a very long attention span! You have to get creative.

Q: What was your first job? And how did it shape or impact you?
RC: I was a grocery store cashier making $4.35 an hour. I learned that you have to work hard to get anywhere. The retail world is a good place for a first job, because retail never stops. I worked hard and earned promotions. I guess that’s the first place I learned that hard work pays off.

Q: It looks like you received an awesome promotion with your employer, Sharonview Federal Credit Union, to Senior Vice President of Marketing, Communications and Member Engagement. Can you share with our audience how much that meant to you?
RC: It was overwhelming. It confirmed for me that I didn’t dream too big after all. To get a promotion in the area of work I love – it’s living my dream.

I had worked at other companies where I’d been promised I was next for a promotion. But next never came. There are circumstances out of your control and out of your manager’s control. When your company merges with another one, there’s another “you” in that company. Suddenly, there’s competition for your job. Even after getting passed up for promotions, I stayed. I hoped the higher-ups would see my value. But sometimes leaving a company is the best way to get promoted.

Q: What are the best practices you have employed to build a successful career?
RC: When you move to a new company, get to know and appreciate that company’s culture. Don’t talk about how great you had it with your former employer. (If it was that great, you wouldn’t have left!) Be present where you are. Find the things that make that culture special and appreciate them.

Realize you are not going to single-handedly change a company’s culture. You’re not there to change it. You’re there to enhance it.

Q: What is one word of advice you can offer to young women who want to reach your level of success?
RC: Be clear on what your value is. Don’t shrink yourself.

Q: Were there moments in your career that were pivotal to getting where you are today?
RC: Yes, having leaders who believed in me. If you have a manager who believes in you and supports you, you’ve got a good thing going. Having great internal support helps you focus on what matters.

I learned this in my first job and I keep being reminded of it in every job I’ve had: Hard work pays off.

And this, too: If you put the work into something you love, there are rewards greater than a paycheck. Personal fulfillment is just as important. Maybe more so.

Q: Which woman inspires you and why?
RC: My mom. She always said, “Don’t do anything to embarrass me.” In other words, don’t be a fool.

She had me when she was 19 and sacrificed so much to raise my two brothers and me. I believe the best thing you can do for your parents is to be a self-sufficient adult. I am, and I hope it makes Mom proud. I’m still trying to make my mother proud.

Q: As a woman, what is the most significant barrier to becoming a leader?
RC: Self-doubt. Women too often see a job description that sounds perfect but think: I don’t know if I have everything they’re looking for. I don’t know if I have what it takes. Most of our male counterparts are not filled with self-doubt; some of them are overly confident.

As women, we sell ourselves short too often. Give yourself credit. Don’t listen to the little voice in your head that is your harshest critic.

Q: What advice would you give to young women who want to succeed in the workplace?
RC: Besides work hard, I’d say: Find a mentor. I’ve tried to find a mentor in every job I’ve had. I am still in touch with some of them, even though it’s been decades since we worked together.

I’d also say: Believe in yourself. Have confidence and courage. Remain humble, but don’t apologize for your success.

Q: If someone wrote a biography about you, what do you think the title would be?
RC: That’s a tough to answer. I have a colleague who would tell you the title would be: “She Worked Herself to Death.” She laughs and tells me I’ll probably die at my desk – but that I’ll die happy if I can just get one more email out.

Seriously, though, I think the title would be: “She Loves Her Work.” My mom pointed out to me that most people are happy when they have a snow day. I’m upset. If I can’t work, I’m not my best self.

1. If you could talk to one famous person, past or present, who would it be and why?
Harriet Tubman. She was barely educated, but she did what people said couldn’t be done. She was a most unlikely hero. I’d want to ask: How’d you do it? What kept you going?

2. What’s your favorite city and why?
New York. It has so much character, culture and diversity. My favorite place in the world is Disney World. It truly is the happiest place on Earth.

4. What’s the best advice anyone’s ever given you?
“Don’t worry about what other people are doing. Focus on yourself.” That, of course, comes from my mom and dad.

5. Have you ever met anyone famous? Who?
I didn’t meet her, but I was in the same auditorium with Oprah when she came to Charlotte on a speaking tour last year. You feel the magic when you’re in a room with her. She makes you want to live your best life

Egypt Sherrod, Starring as Co-Host Alongside ..

Q: Was real estate a pathway to design for you or the other way around? ES: I was a real..

She Has Overcome the Worst Adversities, Inclu..

Q: Do you regularly relive or re-experience these traumatic events? LP: Yes, unfortunate..

Her Vision is to Inspire People to Be He..